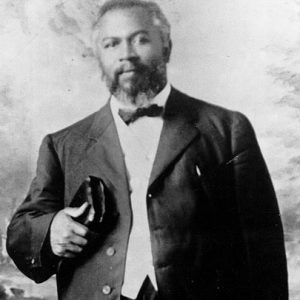 William J. Seymour (1870–1922) was one of the most influential men in the birthing of the modern Pentecostal movement. His leadership and participation in the Azusa Street Revival at the beginning of the 1900s sparked the growth of a global reawakening to the ministry of the Holy Spirit and a large missionary sending movement. Born to former slaves in 1870, he had a humble upbringing in Centerville, Louisiana, amidst much poverty and devastation,1 and humility was the character that marked William’s life.2 In his early 20’s, he traveled throughout the Midwest working as a hotel waiter. While in Indianapolis, IN, he attended a church and surrendered his life to the Lord fully for the first time.

Eventually, Seymour’s journeys led him to Houston, TX. There he met Charles Parham, who was then leading a bible school in that city. Because of the segregation laws of the time, William was not able to officially attend the school, but his hunger for God compelled him, and he would sit in the hallway outside of the classroom door in order to learn as much as he possibly could.3 While in Houston, he was frequently involved in evangelistic outreaches in the black area of town. Seymour made connections with other believers while in Houston, and in early 1906, he was invited to become the pastor of a small holiness church in Los Angeles, CA. Seymour’s arrival in Los Angeles created a small stir in the holiness community there because of his bold preaching about the baptism of the Holy Spirit and speaking in tongues.

After about a month in the city, he arrived at the church to teach at the Sunday evening service to find the door locked.4 His zeal was not dampened and soon he had gathered several people and started a prayer meeting in a friend’s house on Bonnie Brae Street. The first gatherings were attended primarily by a few African American washwomen and their husbands,5 but within a month, these humble prayer meetings had exploded. The Holy Spirit had begun to anoint this gathering and many people started to pray and sing in tongues. The exponential growth soon caused the group to move to a larger building; 312 Azusa Street. This was the beginning of what became known as the Azusa Street Revival. People streamed to these meetings from all over the nation and eventually the world to witness and be a part of these meetings. Many were saved; many were healed, both in body and in soul. Many spoke in tongues; many received strength and encouragement to continue to live in holiness.

This movement didn’t just stay within the walls of the Azusa Street Mission building. Within nine months, many missionaries were already being sent throughout the West Coast of the United States, and thirteen missionaries departed for Africa. Just two years after the outpouring of the Holy Spirit in 1906, missionaries commissioned in the Azusa Street Mission could be found in Mexico, Canada, Western Europe, the Middle East, West Africa, and several countries in Asia…South Africa, Central and Eastern Europe, and even Northern Russia.6 The Azusa Street legacy has formed and fashioned many influential leaders in the Body of Christ over the past century, including people such as Pat Robertson, Oral Roberts, and T.D. Jakes. It was also the precursor to multiple major denominations, such as the Assemblies of God, the Church of God in Christ, and the Vineyard Christian Fellowship.7

A man of great humility, William Seymour was the face and de facto leader of the Azusa Street Revival8 and the testimonies of those around him, who saw his life, attest to his character. Frank Bartleman, his co-laborer and fellow leader at the Azusa Street Mission, described him by saying “(he was) very plain, spiritual, and humble… Brother Seymour generally sat behind two empty shoeboxes, one on top of the other. He usually kept his head inside the top one during the meeting, in prayer. There was no pride there.”9 William H. Durham was a pastor from Chicago who traveled to Azusa Street. His description of Seymour was this: “He walks and talks with God. His power is in his weakness. He seems to maintain a helpless dependence on God and is as simple-hearted as a little child, and at the same time is so filled with God that you feel the love and power every time you get near him.”10 William Seymour was a man fully surrendered to God, and the Lord used him mightily to bring about a major reawakening to early 20th century America and eventually the whole world.