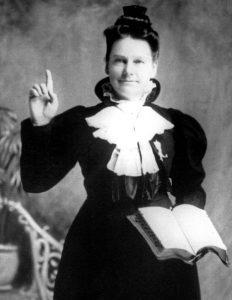 Maria Beulah was born on July 22, 1844, in New Lisbon (now simply Lisbon), Ohio, the fourth daughter of Samuel and Matilda Underwood, both of whom were neither Christians nor even nominal churchgoers, a fact which caused Maria some grief later in life; she felt that she had missed out on general Christian socialising that would have stood her in good stead when she was being aggressively questioned by educated male clergy. Samuel Underwood was an alcoholic who frequently abandoned his family to binge drink, leaving them with no money for food or warm clothing. When Maria was around eleven, her father died of severe sunstroke.7

There were eight Underwood children. Maria’s widowed mother, Matilda, had no way of providing for her children, so the eldest daughters (including Maria) were sent out to work. This was a devastating blow on top of the distress of her father’s death and the humiliation of his alcoholism, since Maria longed for an education, a dream which then became impossible.8 She continued to study and read at home whenever she could, but in her adult years her education certainly was not as complete as that of the typical preacher during her day.9

When she was thirteen, Maria converted to Christianity at a Disciples of Christ congregation. Samuel and Matilda had been attending the church for a year when he died, and Maria was forever grateful that her father had been converted before his death, for she believed completely in an eternal hell as the final destiny for the unconverted. During Maria’s conversion experience, she heard God’s call to become an evangelist: “I heard the voice of Jesus calling me to go out in the highways and hedges and gather in the lost sheep.”10 When she was baptised the following day, Maria was visibly accompanied by a supernatural experience that was to become her ministry trademark. As she was going into the water, a light came over her, and the people in the congregation saw the change around her and said that she had fainted.11

Maria was extremely anxious to obtain an education so that she could be “useful in the vineyard of Christ.”12 Her financial circumstances made it impossible, however. Her solution to her dilemma was one that many Pentecostal and other Christian woman still employ in the twenty-first century. To obtain a pulpit, many contemporary Christian women simply marry a pastor, minister, or priest.13 Maria determined to marry an earnest Christian with whom she could enter into mission work: “I had never heard of women working in public except as missionaries, so I could see no opening, except, as I thought, if I ever married, my choice would be an earnest Christian and then we would enter upon the mission work.”14

Maria’s personal memoirs depart from her missions-oriented purpose at this point, however. In her testimony about her life and experiences, she states that her first husband was converted in the Methodist church after they were married. Maria describes his conversion as “very bright” and that “he seemed to speak with other tongues.” She states that they had a happy home for a while, but that when trials came, he became discouraged.15

Regardless of how genuine his conversion was, she made a poor choice when she married “Mr. P. H. Woodworth” (whom she never called by his given name, Philo Harrison), a discharged veteran suffering with a brain injury. They married after a brief courtship and settled in the country near Lisbon, where Maria was constantly overcome by grief, sickness, loss, and discouragement. Five of her six children died, one after the other.

An interesting feature of her writing is that she does not often describe her children’s lives, but frequently recurring narratives do describe their last agonies in death. Several of her children are named only once or twice in her narratives, and the sixth child is not named at all. The five named children were Lizzie, Willie, Gertie, Freddy, and Georgia. The sex of the sixth child is not evident. It was Lizzie who lived beyond infancy. Maria was continually ill, and all of her children were sickly until their respective deaths.

Throughout this tragic period in her life, Maria seldom mentions her red-bearded husband, Mr. Woodworth. His presence is not evident as either a partner in her grief or a nurse in the poor health of either her children or herself. Later, however, when he began to behave badly at her public meetings, she said that sorrow had affected him as a permanent derangement and described how he would go around their farm looking for their deceased son Willie, saying that someone had taken him away.

Maria became an immediate success. She held revival meetings in the churches in her home area around Columbia County, Ohio, and began to plant new churches immediately. Before she left home for her extended revival tours, “going west” as she called it, she had preached over two hundred sermons. All were ecumenical for eight different denominations.

At the time, religious revivals or tent meetings were like carnivals coming to town. In isolated rural areas, they may well have been the only recreation to visit within many years. When Maria reflected upon her instant success, however, she said: “God wonderfully blessed my labours in every place.”22

Several church groups recognised her preaching and organisational abilities and approached her with attractive offers. The Friends wanted her to travel as a revivalist for a year, and the United Brethren wanted her to take charge either of the Women’s Missionary Society or of a circuit of churches. A group called Bible Christians wanted her to take three large churches for them, and the Methodists also offered her a church.23 With the exception of The Friends’ offer, which was an itinerant ministry, these offers were all within ten miles of her home, and each group offered a good salary. The itinerant ministry offered by The Friends appealed most to Maria because she felt called to be an evangelist, and her heart was already set on “going west.”24

All around her in eastern Ohio, churches excitedly accepted the new woman minister, but in her own household, Maria’s husband and daughter thought that she had lost her mind. Mr. Woodworth reluctantly consented to Maria preaching in their local area, but for over eighteen months he would not participate in her dream to become an itinerant evangelist. He did finally agree to accompany her on her evangelistic mission to the West, a tour endorsed by the United Brethren church, and Maria records then that he became not merely willing but eager to go with her and fulfil her calling.25 Her narratives do not speculate on his sudden change of heart, however; rather, they ascribe the move to the Holy Spirit. He must have known that such a career move would offer few comforts and even smaller financial remuneration. Her readers cannot help but wonder if he was afraid that she would go without him. Perhaps he saw the entrepreneurial potential. He certainly did develop a commercial enterprise selling food, books, and Maria’s photographs at her tent meetings. In fact, newspaper reporters often criticised his efforts, sometimes likening him to the moneychangers in the temple.26