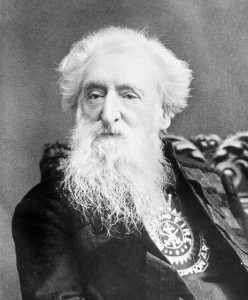 William Booth was born in Nottingham on 10 April 1829, the son of Samuel Booth and his second wife Mary (nee Moss), both from Derbyshire.
Birth and parentage

William Booth was born in Nottingham on 10 April 1829 and had three sisters Ann, Emma and Mary and an elder brother, Henry, who died on his own second birthday. Writing about his father, William said: “My father was a Grab, a Get. He had been born into poverty. He determined to grow rich; and he did. He grew very rich, because he lived without God and simply worked for money; and when he lost it all, his heart broke with it, and he died miserably.”
Pawnbrokers’ Apprenticeship and death of his father

In 1842, when he was aged 13, his father sent him to work as an apprentice to Francis Eames in a pawnbroker’s shop situated in the poorest part of Nottingham. He disliked his job, but it was through this work that his social conscience was stirred and he became aware of the plight of the poor.

In September that same year, his father Samuel became ill and died, though not before making a death-bed repentance. Shortly after, his mother had to leave her the house in Sneinton for a small shop in one of the poor quarters of Nottingham where she earnt a meagre income selling toys, needles, cotton and the like.

It was at this time that William started attending Broad Street Wesley Chapel (Methodist) and in 1844 he had a conversion experience, noting that: “It was in the open street [of Nottingham] that this great change passed over me”.

In 1846 he was impressed by the preaching of the Reverend James Caughey from America and David Greenbury from Scarborough. Encouraged by Greenbury he joined a group of fellow believers who preached in the streets. He delivered his first sermon in Kid Street.

Eventually Booth stopped working at the Pawnbrokers and was out of work for a year.
Marriage

In 1849 William moved to London to find work, briefly returning to pawnbroking but also joining a chapel in Clapham. Through this church he was introduced to his future wife, Catherine Mumford. After becoming an evangelist in the Methodist New Connexion, they married on 16 July 1855, forming a formidable and complimentary lifelong partnership.

Following a brief honeymoon, he was appointed to circuits in Halifax and Gateshead. But, finding this structure restrictive and feeling himself called to itinerant evangelism, he resigned in 1861.
The Christian Mission

Four years later William and Catherine moved to London. It was here that William commenced his first open air evangelistic campaign in Whitechapel, preaching in a tent. This ministry led to the formation of The Christian Mission, with Booth as its leader.

In 1878 The Christian Mission was renamed The Salvation Army. ‘General Booth’, as he was now known, summed up the purpose of this body in the following way: “We are a salvation people – this is our speciality – getting saved and keeping saved, and then getting somebody else saved.” But there was to be frequent opposition to the Army’s methods and principles in its early years.
In Darkest England

After suffering from cancer, Catherine Booth was ‘promoted to Glory’ on 4 October 1890, leaving a significant void in William’s life. In the same month Booth published his major social manifesto, ‘In Darkest England and the Way Out’. He explored various far-reaching ideas, such as providing hostels, employment centres and helping young men learn agricultural trades before emigrating.

Thereafter Booth turned back to preaching and evangelism, with day-to-day administration of the Army passing to his oldest son, Bramwell. The years that followed were difficult ones for William. He had to deal with three of his children leaving The Salvation Army and one dying in a train crash.
Motor Tours

In August 1904 William Booth, always eager to make use of new technology, commenced his first motor tour, travelling from Land’s End to Aberdeen. Six more motor tours followed. Then in the spring of 1905, en route to Australia and New Zealand, General William Booth visited the Holy Land, where he visited many sites of biblical significance.

On his return he was honoured by being given the Freedom of the cities of London and Nottingham. Amongst many other honours, Booth was also awarded an Honorary Doctorate of Civil Law from Oxford University.

Though his eyesight started failing at this stage in his life, it didn’t prevent him from conducting campaigns, with his last trip abroad being to Norway in 1912.
The General lays down his sword

On 17 August 1912, The War Cry reported that the General was “not so well.” Three days later, on 20 August at 10.13 p.m, and following a terrific thunderstorm – as had occurred just prior to the passing of the Army Mother 22 years before – “the old warrior finally laid down his sword”.

In accordance with a widely felt desire, the body of the General lay pavilioned in state at The Congress Hall, Clapton, on the Friday, Saturday and Monday following his passing, when some 150,000 grief-stricken people passed the bier to gaze upon the ivory-like features of “the world’s best-loved man.” The Mayor of South Shields had described him as “The Archbishop of the World.”

A public memorial service was arranged at Olympia on the following Wednesday (28 August 1912), when 35,000 people attended, including Queen Alexandra, who came incognito, and representatives of King George V and Queen Mary. The procession took twenty minutes to pass down the long-extended central aisle.

The funeral was conducted by the new General, Bramwell Booth, at 3.00 p.m. on 29 August, at Abney Park Cemetery, Stoke Newington. The heart of London stood still for nearly four hours as the lengthy procession of some 7,000 Salvationists, including forty bands, wended its five-mile way through densely crowded streets from the Victoria Embankment, no fewer than 580 City and 2,370 Metropolitan police being on duty. The estranged Catherine Booth-Clibborn and Herbert Booth were among the mourners, and Ballington Booth and his wife sent a telegram of love and sympathy.

Bramwell Booth delivered a striking address at the graveside, in the course of which he said: “If you were to ask me, I think I could say that the happiest man I ever knew was the General. He was a glad spirit. He rose up on the crest of the stormy billows, and praised God, and laughed at the Devil’s rage, and went on with his work with joy.”

His legacy was a Salvation Army that numbered 15,875 officers and cadets, operating in 58 lands.