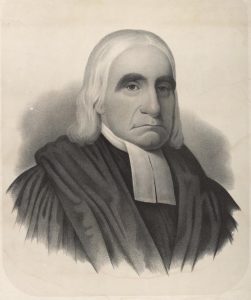 Born at Pantybeudy, Nantcwnlle, Cardiganshire, son of Daniel and Janet Rowland — his father holding the living of Nantcwnlle and Llan-geitho. According to tradition, he was educated at Hereford grammar school. He was ordained deacon in 1734 and priest in 1735, and became his brother John’s curate in the above-mentioned places. In 1734 he married Eleanor Davies of Caer-llugest. He experienced a profound spiritual conviction under the ministry of Griffith Jones, c. 1735, and began to thunder against the people’s sins. On the advice of Philip Pugh he modified his style and preached grace rather than the law. He began to travel up and down the country, and in 1737 met Howel Harris; the result was that, before long, these two had joined forces to push forward the great Methodist revival in Wales. Disagreement arose between him and Harris, against whom he published, in 1750, Ymddiddan rhwng Methodist Uniawngred ac un Cyfeiliornus. In 1752 there was a complete split between them and he now became the leader of ‘Rowland’s people,’ as his followers were known. In 1760 his brother was drowned at Aberystwyth and the revivalist’s son was given the living of Llangeitho. For some time he was his son’s curate and built a meeting-house near the parish church for his own services, but c. 1763 he was, for some reason or other, deprived of his curacy. In 1767 the parishioners of Nantcwnlle vainly appealed for his return. From that time on he chose to stay with his people in the ‘New Church’ at Llangeitho, although he was offered the comfortable living of Newport, Pembrokeshire, in 1769. He died 16 October 1790, and was buried at Llangeitho 20 October, ‘at the age of 77,’ according to the parish register.

Daniel Rowland was, above all, a preacher, and for a long time made Llangeitho the Mecca of Welsh Methodists. Thousands flocked there from every part on Communion Sunday, and he exercised a profound influence on the spiritual life of his generation. Small books of his sermons were published in 1739, 1762, 1772 (two volumes), and 1775. Some of them were translated into English and were published in 1774, 1775, and 1788. He also wrote a number of hymns’ for the early collections, such as Llwybur Hyffordd i’r Cymry, 1740, and Sail, Dibenion, etc., 1742. Six of his hymns will be found at the end of Marw i’r Ddeddf, etc., 1743, nineteen in Hymnau Duwiol, etc., 1744, and he published a small collection of Hymnau Duwiol in 1745. His last collection was published in 1772 under the title Pum Pregeth ac Amryw o Hymnau. He was a pioneer of the Welsh hymn before William Williams of Pantycelyn had begun to write hymns. He translated some English books into Welsh, e.g. Bunyan’s Holy War, 1744; Aceldama, 1759; Wetherall’s Fifteen Sermons, 1762; and the elder Thomas Boston’s The Crook in the Lot, 1769.