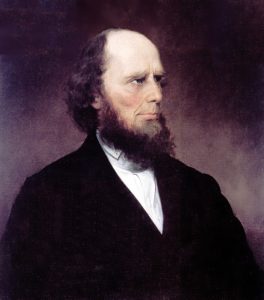 Charles Grandison Finney was born in Warren, Connecticut, on August 29, 1792. As a child, he lived in western New York but returned to Connecticut for his education. He studied as a lawyer but soon gave up his practice of the law in order to become a Presbyterian minister in 1824.

Finney is probably best known for his contribution to the religious movement known as the Second Great Awakening during the 1830s. At the heart of this movement was a series of revivals. Finney was an evangelist who spoke at these revivals, using emotional sermons to urge his audiences to devote their lives to God. He was extremely successful in obtaining converts but also stirred up controversy wherever he went. He was an outspoken abolitionist and championed other social reforms in the nineteenth century. In contrast to most churches, who encouraged women to not actively participate in services, Finney asked women to pray aloud at his revivals. In addition to his speaking at revivals, Finney published many of his sermons and religious beliefs and became an influential theologian.

Although the Second Great Awakening eventually ended, Finney continued to influence American religious thought. In 1835, Oberlin College hired him as professor of theology. Finney continued to preach on a local level but ceased to travel extensively as an evangelist after that point. In addition to his years of service on Oberlin’s faculty, he became the college’s second president from 1851 to 1866. Finney died at Oberlin on August 16, 1875.